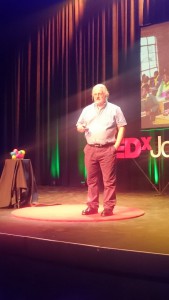 It was a great experience to have the opportunity to present my case for improving school-level mathematics at TEDx Johannesburg at the exceptional Soweto Theatre today.

During the talk I posed an interesting mathematical question, which is suitable for the Grade 9 level. I am now analysing this further and exploring its solution, which is far easier than it appears on the surface. The question is to evaluate the following expression:

and there are 3 marks given for the answer.

I indicated during my talk that the answer is 42 (which also happens to be the answer to the “riddle of life, the universe, and everything” from Douglas Adams’ The Hitchhikers Guide to the Galaxy.

I noted that the

is considerably larger than the number of atoms in the known universe, which is estimated at

and which is approximately

is larger than the number of atoms in every possible alternate and parallel universe which we can conceive of.

So in the numerator of this common fraction we have three of these very large numbers, and in the denominator we have another such large number.

Using my APEX approach (Analyse, Plan, Execute, Xcrosscheck), the first job is to read this, and to see any patterns which may help to find a way to the answer. It is clear that the indexes 2015, 2013, 2011 and 2010 are very similar in size (which may be useful), and also they are current years (which may or may not be useful – and may simply be a distraction).

Considering that they are are similar in size, we can see that each of these numbers is

where n=5, 3, 1 and 0 for these four indexes. There is also a useful rule of exponents which says that

Combining this we can rewrite our question as

is common to all and can be cancelled out. NOTE: This process of cancellation is complex and relies on much other mathematical knowledge. Cancelling these reveals

Which means that this becomes

The steps in this process may be too large a jump for you to understand. However, when we do our workings to get from a question to an answer one important decision you  have to make is how much detail you present to the teacher or examiner and how much you can assume that they know.

The key information to help with this decision is that this question has 3 marks, and since this means that 3 things are expected to be included into the result to provide evidence of your understanding. Whereas you could write out each individual step, this may take 6-10 steps, and yet there are only 3 marks. As a result, you must now select which of these steps is important to write down, and which can be omitted.

Clearly, a step which shows that

can be expected to be obvious, but the application of the formula

is important in the solution and should be included. Also showing that

is not necessary to include or explain, as well as that when cancelling out the

that the denominator becomes

The PLAN part of the APEX approach considers which mathematical elements you will be using, and the sequence in which you will apply them. This also means the planning for what you will write in the answer and what you will not write down. As you become more experienced, you will be able to do much of this work in your head, using mental calculations rather than having to write each step down in details. You need to demonstrate that you have selected the right operations, put them into the right sequence, and have arrived at the right answer, and then you will score all 3 marks for this. Writing down the answer alone may only give you one mark.

Here is the likely solution which will give you the full 3 marks: