Today I will focus on the questions in the Grade 12 examination papers which include inequalities.

Let me first distinguish between an equation and an inequality.

An equation is a mathematical statement, mostly with two sides (left hand side and right hand side) which declares that both sides are equal. Equations are fundamental to all of mathematics and are statements that the equality between the two sides holds as a universal truth, perhaps with some conditions in which is may be true.

Let us consider two examples of equations, firstly the Theorem of Pythagoras:

Another famous example, perhaps the most quoted equation of all time, is Einstein’s formula

However, there are also a range of mathematical statements which do not indicate quality between the sides, but rather than inequality. These are statements in which the one side is less-than the other side, or is less-then-or-equal-to the other side. These are expressed using the following symbols

So consider a single example of an inequality

which states that x has a value which is greater than or equal to 4. However, this is a statement, and this statement can either be true or false, depending on the value of

then this statement is false, and if

then it is true. So what if

? This is where the difference lies between

This statement is too simple for our purposes here, and we need to consider more complex examples, similar to what are provided in the Grade 12 examinations. For example consider the following question:

which could also be stated, equivalently, as

by just multiplying out the factors. So both of these forms are the same, yet the second requires the additional step of factorisation to support an approach to its solution.

You may have been taught procedures to solve this type of problem, but I would rather resort to first principles and solve this by inspection.

The first principle that is for

Then either both are positive

or both are negative

There is no other way to create a positive result when the two values are multiplied, since if one is negative and the other is positive this will always yield a negative result. If one or both of the values are zero, their product is zero., and thus neither positive or negative.

So getting back to our problem, let us look at the first case, in which both case positive, which means that

In the first expression,

must be greater than 2 for this to be positive, and for the second this requires

then both of these are satisfied, both values are positive, and the expression is positive.

In the second case, both must be negative which means that

then both are satisfied, and this is sufficient for the answer.

This type of problem is typically only given 2 marks, and so you have to work fast to get these marks and to write down the minimum needed to show you have selected an approach which works and also that you have arrived at the correct answer.

Be careful to note whether this is indicated as greater-than, or greater-than-or-equal-to since this will also have an impact on your answer and a silly mistake can cost you the marks.

Have a look at this question from the Grade 12 supplementary exam in Feb-Mar 2017.

This question is given 2 marks, which means that you do not need to do much to complete this, and anything more than a few lines and 2 minutes spent means that you are wasting your time.

You effectively have to show that you have selected the right approach and that you have produce the right answer. However, just writing the answer alone will not give you the 2 marks you need.

Divide this problem up into two parts being the

For the expression to be greater than zero, then both of these parts must be positive or both must be negative (since multiplying two negatives will create a positive – you knew that, didn’t you!).

For both of these parts to be positive, then

must be greater than 4 (NOTE: not greater than or equal to – it must be GREATER than only otherwise it will become zero).

For both to be negative, then

must be less than zero.

So the answer will be that

I have included a detailed solution of two of the questions from the Grade 12 supplementary examination from Feb-Mar 2017.

These are part of the Question 1 on Paper 1 which has been consistent for many years.

These questions draw on your prior knowledge of algebra from previous grades, and include you proficiency in factoring numbers, exponents, signs, and basic algebraic manipulation. However, these are all solvable, and you should be able to gain time in the examination by attending to these questions at the start of the three hours that you have available.

Try these two to get started from this examination:

Keep checking back often. More to come every day or so.

This has 2 marks, and 2 marks is 2 minutes of work maximum. However, you can solve this far quicker since you have already been given everything you need to know in the question.

You will recognise this as a factored quadratic expression,, and thus you do not need to do the factoring first.

For any expression of the form

) it is required that either one of

Thus we can divide this up into two expressions:

Similarly for the other expression
From

we can determine that

(which would be considered a silly mistake).

When writing this answer consider that the examiner is expecting to see, which parts of your answer have value which would warrant the allocation of a mark.

How you write this answer is important, to emphasise to the examiner where your most important parts of your answer are, even if you have done other calculations.

TRY THESE EXAMPLES YOURSELF:

The Grade 12 supplementary examination for mathematics was made available on 26 July 2017 for download.

This page looks at Question 1 of Paper 1 which, like all examination papers for many years, is on algebra and the solution of equations and inequalities. 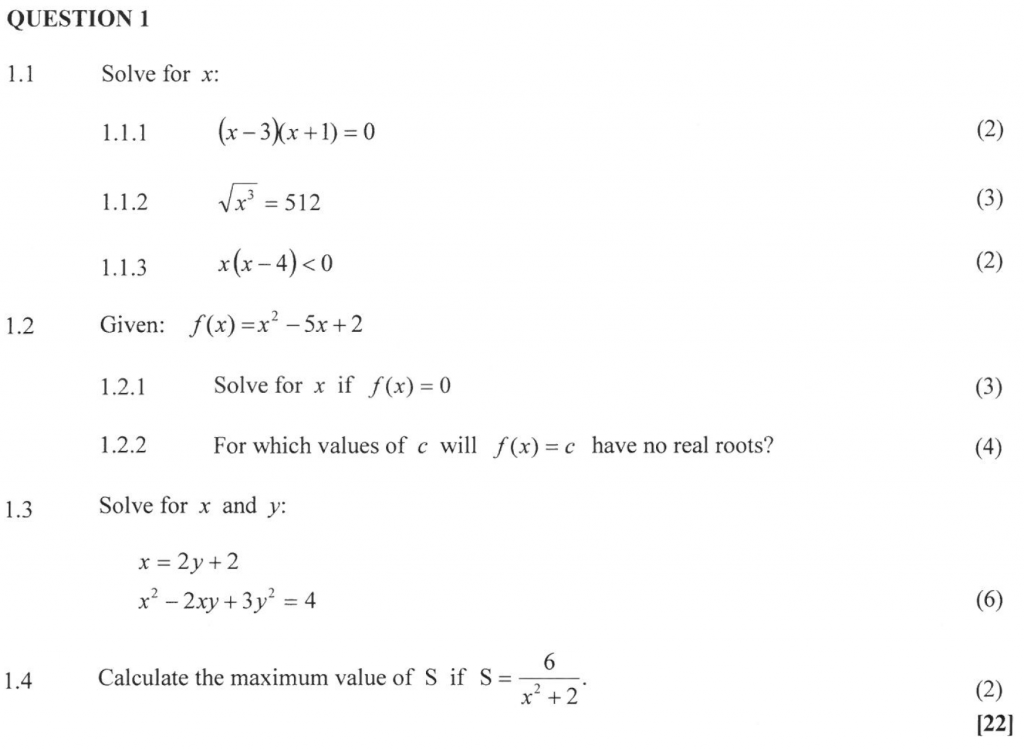 Notice first that this Question 1 carries a total of 22 marks. The total for each paper is 150 marks, so that this question contributes 22/300 = 7.2% of the total marks. I will be emphasising this point, since it is possible for you to score full marks on this question and then this is already 7.3% of what you need to pass, and to excel.

Another point to notice is that the total marks of 22 for this question also indicates that you should be spending no more than 22 minutes on this question – based on the rate of one minute for one mark. This is not completely correct mathematically, since in three hours there are actually 180 minutes (you knew that, didn’t you!), but aiming for one minute per mark then should provide you with a 30 minute buffer for those questions you are struggling with.

Ideally you should be spending less time then the one minute per mark on the “easy” questions, to gain further time for the other questions which are more challenging.

You will have a little time to read and during this time you should recognise the problem forms and to plan your approach.

Sub-question 1.1 consists of three questions in which you need to solve for

, with the first being a factored trinomial, the second being an exponent, and the third being an inequality.

Sub-question 1.2 uses function notation and asks you to solve the equation

and then the second part, worth 4 marks is to determine the nature of the roots.

Sub-question 1.3 is simultaneous equations, with one being linear and the other quadratic, in two variables x and y.

Finally, sub-question 1.4 asks for the maximum value of a potentially complex expression, but it carries only 2 marks, so there must be some simple solution.